Brazilian Butt Lift Before and After Photos Explained 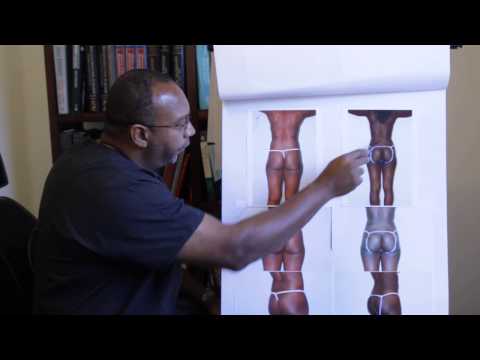 Now what I want you to see after – between the before and after pictures is creating a narrow waist is the key to the procedure. When you make a narrow waist, everything looks good. The other important thing to see is that skin contracts. If you look at the skin before and compare it to the skin after, the skin before is looser and it’s tighter after the surgery.

Now we look at the back. Again, the big deal is the waist. When you make a small waist, everything looks good. So far as the fat transfer, we add the fat to the hips. If you look at the thigh, you see a curve, the flat line, then another curve.

The goal is to fill this area to get one smooth curve really from the thigh to the hips. The narrow waist and the small back is a key to the operation. Everybody is a little flat on the bottom. Adding fat to the bottom gives more projection.

Another patient. Again, the primary example I want you to see, the skin after is tighter than the skin before. Again, some people would say this person had to have a tummy tuck, liposuction. It didn’t work. But it does work. Skin will contract if superficial liposuction is done correctly. Again, if you look at the curve on the hips, we see a curve, a flat line, a curve. Goal is to get one smooth curve from the waist to the hips. The waist is the key to the operation. Look at the skin on the back. After the skin is tighter than it was before and more projection in the buttocks.

A small back. That looks great. That’s the problem. If you have a small back and small waist, everything looks good. You can see this indentation. You fill this out to get a smooth curve. Then more projection.

The next example, this is a thin person. She wanted more definition. She wanted a six-pack to show. So what we did was liposuction, abdomen, plank, back, inner thigh and knee. Do extra liposuction here and here and then less the six-pack show. If you like the muscle look, that’s what we will do. If you look, indentation, now no indentation. It just looks cleaner. When you take away the inside of the knee, the inside of the thigh, the thigh looks more muscular and the knee looks more muscular.

If the abdominal wall is weak, then you mandatorily have to have a tummy tuck in order to tighten the muscles. But you can just see a completely different look. Here she’s just straight up and down. Here shaped and curved.

Great skin. You know it will contract. All we did was find the small body inside of here. No curves to very curvy. Look at the length of this line. Look at the length of that line. This line is at least 30 percent shorter than that. That means the skin contracted 30 percent. Taking down this big back. Given a tiny back, looks great. Now what do I do when I see scars? You can never – I can never get them perfect. Better but not perfect.

Now this is just liposuction alone. There’s no fat transfer. What I’m trying to show with this picture is when you liposuction one area and take away a storage area for fat, another area will compensate. Liposuction is not a weight-changing procedure. If you take away one storage area, some cells will get bigger. This lady had liposuction, abdomen, flank, back, arms, inner thigh. She’s too straight. Now curves.

Thin person but no shape. Thigh is more prominent than the hips. The waist is wider than the ribs. Liposuction, abdomen, flank, back, inner thigh, outer thigh, arms, fat injection in the buttocks. Your eyes beforehand go to the thighs. Now your eyes go to the hips. Nice, smooth curve.

And even though this lady is thin, there’s still extra in the waist. Everybody. I don’t care if you weigh 100 pounds. There’s still extra here. You get that down. Everything looks better. Her big problem was hollow in these hips on the side. We use what fat we have to fill the hips. This is just a better shape than that. There’s just more projection in here.

Again, just finding a great curve that’s inside. The curve is hidden by this. Liposuction, abdomen, flank, back, arms, inner thigh. This skin is tighter than that skin. Let these curves show. Flat line, fill those to more curves.

Taking down this big back. Letting it show. Curve, flat line, curve. Now it’s smoother curve. More projection. Hollow area. Fill that hollow. Not a heavy person but this nice curve is hidden again. Good skin. It contracts. Liposuction, abdomen, flank, back, inner thigh. You bring a small waist, everything looks good. Look at the skin on the abdomen before, skin after, tighter afterwards.

Everybody has got too much here. It doesn’t matter how much you weigh. You bring that down, everything looks good. Too straight. That’s a straight line. Straight lines never look good. You got to fill them and get a smooth curve. Then just more projection in the buttocks. Fill the hollow here.

So it does not always have to be a tummy tuck. If the muscles are strong, liposuction option, filling these buttocks.

Look at the skin on the back. Still not completely contracted but 90 percent tighter than it was before. The back is bigger than the hips. Now the hips are bigger than the back. Filling the buttocks, getting that shape, filling the hollows, giving more projection. So liposuction is a powerful tool and can make a terrible difference – a wonderful difference in how people look.

Thin person, great-looking person but hollows. Liposuction arms, abdomen, back, flanks, inner thigh. Good-looking to great-looking. Stomach is flatter. Not a whole lot of fat but filling this hollow, filling these flat spots and just a tremendous change in the look from great to gorgeous. Filling this hollow is a big deal. Taking the waist down. Everyone has got too much in their waist. Small waist, fill the hollow. Everything looks good. That’s the indentation. Now it’s a smooth curve from the waist to the hips. The hollow in the buttocks. Fill the hollow in the buttocks.

I mean just fantastic look. Again, waist, almost as wide as the hips. Great skin. You know it’s going to shrink. Good-looking to great-looking. This skin is tighter than the skin before, always tighter. Very flat on the bottom, fill the bottom.

So that is the conclusion of the before-and-afters, trying to give you an explanation of what can be done and what can’t be done, trying to show you how liposuction plays a role in the Brazilian butt lift.